Bits of tank tape dangle off it where engineers have fashioned crude concealments of its final appearance. Compared to normal press cars, which have been prepped, polished and preened to within an inch of their lives, it’s a mess.

Not that I or its driver, Aston Martin chief engineer Matt Becker, could care less. One minute ago that ‘Aston Martin’ read ‘Lotus’ because that’s what my fingers type automatically whenever Becker is about. We first met when he took me for another passenger ride, that time in an original Elise 23 years ago. And whatever the travails faced by Lotus since them, praise for the ride and handling of its cars has continued unstinted and for that we largely have Becker to thank.

Since 2015 he’s been performing the same alchemy at Aston Martin.

It is well known that the DBS is the replacement for the Vanquish, but that doesn’t mean Becker is just adopting a ‘same but more so’ approach to the car: “The positioning of the DBS is more sporting and extreme than was the Vanquish and I don’t just mean the performance, although that is in a completely different league. Even the Vanquish S, which was a far better car than the Vanquish, was much closer to the DB9 than the DBS is to the DB11. This car has to perform as a supercar GT, so it needs to sit between a pure GT like the DB11 and an out-and-out sports car like the Vantage.”

Becker then starts talking ride frequencies in a language that might as well be Esperanto before putting it terms we can all understand: “During cornering, the DB11 has 3 degrees of roll per ‘g’, the DBS 2.6 degrees and the Vantage 2.1 degrees.”

That is as good a statistical example of where the car has been pitched as any you’ll find.

However, there is nothing in the middle about the powertrain. The truth is that the 5.2-litre V12 motor’s 715bhp is achieved with no hardware modification at all. It was always able to produce than much, but simply held back to 600bhp for the DB11 by software. “But it’s not really about the power,” says Becker, “when you drive it, it’s all about the torque.”

Indeed, for while the power has been raised by 115bhp over the DB11, there’s almost 150lb ft of additional torque, a total of 663lb ft at just 1800rpm. “We needed an all-new gearbox to handle that,” says Becker and the car duly got one, an eight- speed ZF 96HP unit. But even that is at its torque handling limit in the DBS, so much so that torque has to held back to DB11 values in first and second gears.

“Not that anyone’s ever going to miss it,” says Becker, “because we’re somewhat traction limited even as it is…”

How limited? Allow Becker to elaborate: “The other day we were doing some performance testing and it broke traction on a straight, dry road. In fourth gear.” Now consider that this is a car with the traction advantage of having a gearbox between its rear wheels and a far tighter limited-slip differential than that found in the DB11. Fourth!

I clamber aboard to see what he’s talking about. It’s not so much the amount of power you notice but the shockingly immediate and relentless way it is delivered, along with an unforgettable, bellowing soundtrack.

At least from the passenger seat and particularly because of the noise (which is 10dB louder than the DB11) it doesn’t feel like a turbo engine at all, but a snarling, howling V12 of about ten litres displacement.

But what of all this Superleggera stuff? With a kerb weight likely to approach 1800kg, this is clearly no lightweight. “Cars get heavier as they add power because you need to control that power with bigger brakes, wheels and tyres, stronger suspension and additional cooling. So even to stay the same weight an achievement. Yet the DBS is actually 70kg lighter than the DB11,” says Becker, who cites the use of carbonfibre for all of the car’s aerodynamic addenda plus the enormous front bonnet, rear deck and brakes as the prime movers behind the weight loss. Yet for all the titanic performance that results, the car still feels like a grand tourer from the passenger seat, and it’s largely the suspension choices made by Becker and his team that account for it.

“Some things we had to do: we needed a wider track [10mm front, 20mm rear] and bigger tyres to handle the performance [these have grown by one section at the front and two at the rear],” he says. “And of course we worked on the springs and dampers while Pirelli came up with a bespoke P-Zero tyre for the car which works really well: it’s quiet and very progressive when it starts to slide.

“But the secret is in the fine tuning. We could have given it traction by making it very soft at the back but that would have spoiled its balance, in fact we achieved it with the compliance bushing in the rear suspension. We have a higher bias on the limited-slip differential too, the engine mounts were tuned to keep the powertrain more stable under heavy loads and we took some damping out of the steering to make it feel cleaner.” 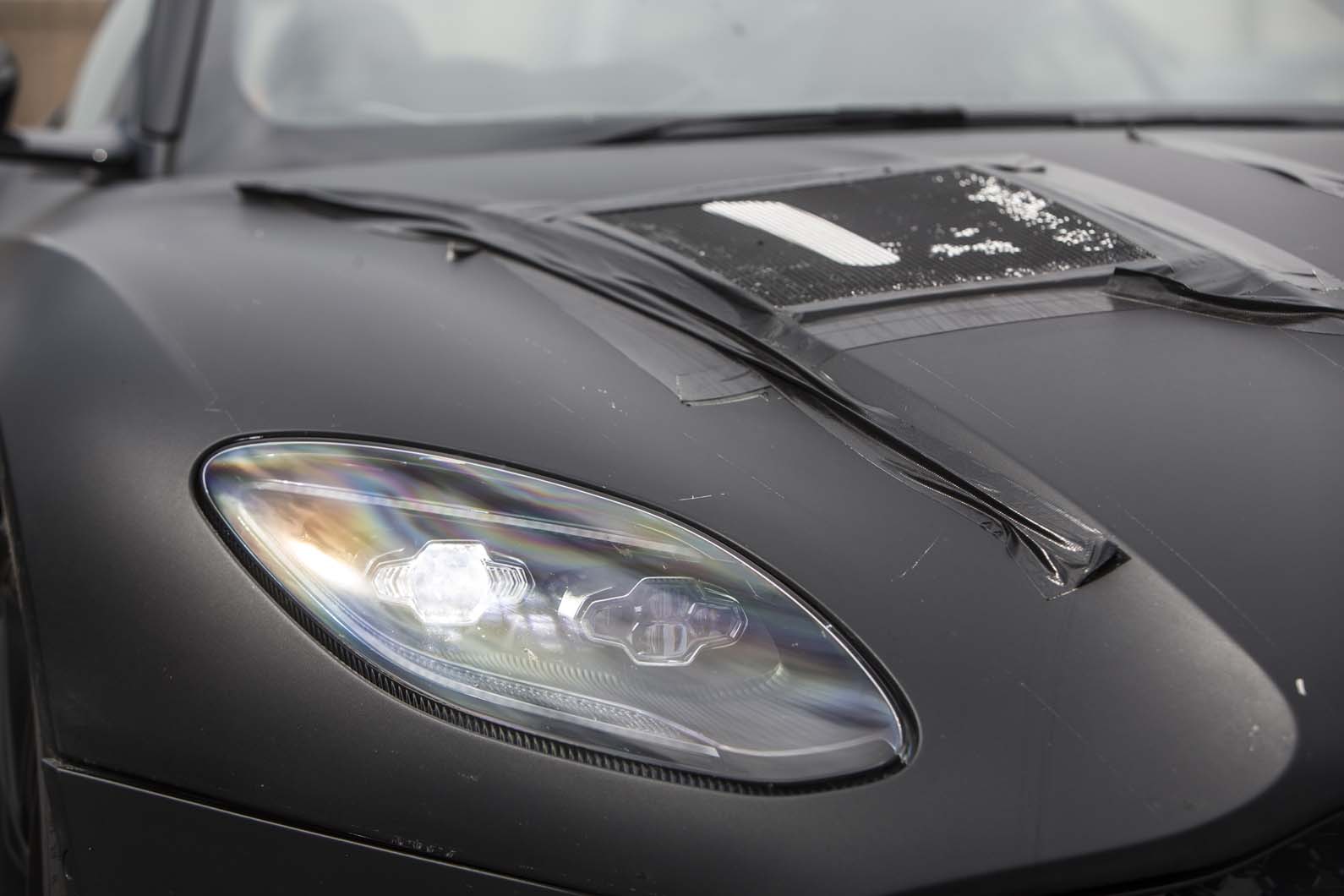 Detail, detail, detail. Of course we must wait until we can drive it before seeing if all this potential has been converted into reality but those areas I can report with reasonable accuracy – the ride, the punch and the noise all suggest that the DBS is not just going to be the fastest, most powerful Aston Martin production car in history, but a flagship super GT the likes of which we have not seen since the legendary V8 Vantage of 40 years ago.

Have you ever looked at old sports racing cars from some European blue blooded brands and wondered why almost all of them from the Ferrari 250LM to the Porsche 917 were right-hand drive? The answer is simple: most race circuits are clockwise, so that’s the side on which you’d chose for the additional mass of the driver to reside.

In the road car arena, chassis tuners like Matt Becker can’t factor such considerations into their calculations because it is impractical to have more than one chassis tune for any given model, and that model could be left or right-hand drive and, of course, be inhabited by one or more people of potentially vastly differing proportions.

“I noticed it more back in my Lotus days,” says Becker, “where in percentage terms the weight of the driver was far greater than it is in an Aston, and if we knew the car was only ever going to have a driver of a certain weight on board and no passenger we could have looked at setting it up differently. As it is we have to use one set up for all configurations.”

Even so, driver mass and where you put it still plays a role in testing: “If a new test prototype is being built for use mainly on UK roads, I’ll make sure it has right-hand drive because it’s impossible to assess what a car’s doing when you’re sitting in the gutter. In general testing we always try to be as consistent as possible which is why for dynamic assessment when we’re setting up suspension and so on, we always use a car with full fluids and two people on board of around 80kg each.”